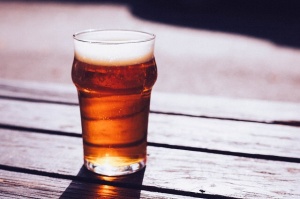 After a certain age, hangovers should be planned. Now, that doesn’t mean you can’t spontaneously have a night out on the town, but it does mean that you need to be prepared when you get home. Waking up in some new kind of hell, because it seems as we get older hangovers get stronger, longer and infinitely more evil, ultimately becomes unacceptable. There are a number of ways to prepare yourself for the drinking aftermath. I swear by bubbles. I refuse to be hungover and without the fizzy little bastards. When you don’t have whatever it is you need, you’ll curse that very same thing. Luckily, I’ve started buying a bottle (or two) of sparkling water to have around just in case. It’s a pretty solid insurance policy. Especially in the summer months where there tends to be a lot of goodbye parties, visiting friends and the odd quiz night where you end up winning a meter of shots.

After I sleepily downed nearly a liter of my saving grace, I was pretty damn spritely. Now water can do many things, but it does not make for a good meal. The last thing I’m trying to do while fighting off last night’s demons is to whip up anything time consuming. Ideally, this is where leftovers come in. They’re free, prepared and sometimes you don’t even have to heat them. Those are my favorite. Second best would be pizza. I’ve been guilty of drunkenly pre-ordering. I’m fairly sure that’s why Domino’s lets you schedule next day delivery in the wee hours of the morning. Who is soberly ordering pizza after 2am? Sometimes your wallet might hate you. Sometimes the doorbell becomes your mortal enemy. But every single time, you will eventually need to roll out of bed and get the damn pizza. Some days that is an easy feat but every now and again you feel like you’re training for a triathlon just trying to get some semblance of food into your belly. The day bedside pizza delivery happens will be a very joyous and dark day. I might just eat myself into a food coma I cannot come back from.

Now, I’m not one for popping pills, but sometimes even I give in. And when I do, it seems like the heavens open just enough to shine on my medicine cabinet with the Advil sat there, glittering in all its glory. You do not want to be caught empty handed with a tear-inducing headache. Especially not when shots happened the night before. Keeping a bottle of relief on hand will make you want to high-five your past self for being a responsible adult, especially when you mixed alcohols, despite knowing better.

I don’t know how many hangovers it takes to finally start planning for them. My guess is it’s different for everyone. All I do know is I’ve had enough, and I refuse to curl up in a ball and be punished for having a good time. If you’re not pre-planning your hangovers, you are essentially just punishing yourself. And we all could use less of that, and more self high-fives for being smart about it. If being equipped to take on a hangover (and the rest of your day) isn’t an act of self-love, I don’t know what is! I’ll cheers to that, but maybe not just yet.

Shout out to my team 43, for placing in last night’s quiz. Without you, I would not have blogged today. (Totally named our team after a bottle of delicious, vanilla flavoured booze. Should’ve known where the night was heading!)